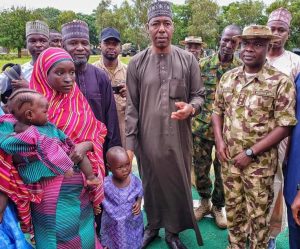 Gov. Babagana Zulum of Borno has received another Chibok Schoolgirl rescued by troops of the Operation Hadin Kai in Gwoza Local Government Area of the state.

Malam Isa Gusau, the Special Adviser to the governor on Media and Communication Strategy, confirmed the development in a statement on Saturday in Maiduguri.

Gusau said the girl was rescued alongside two of her children.

The statement reads in part: “The schoolgirl, Hassana Adamu, alongside her two children, were handed over to Gov. Babagana Zulum by the Commander, 26 Taskforce Brigade, Brig.-Gen. D.R. Dantani.

“Hassana was one of the over 200 schoolgirls abducted on April 14, 2014, at the Government Secondary School, Chibok by the Boko Haram insurgents.

“Zulum was in Gwoza from there he moved to Bama, undertaking humanitarian activities.

“It can be recalled that Ruth Ngladar Pogu and a man said to be her husband had presented themselves to the Nigerian Army on July 28, 2021, at a location in Bama.”

I might have been killed if I didn’t jump bail, Nnamdi Kanu tells Justice...

Inside the ugly war between Tinubu, Osinbajo’s supporters