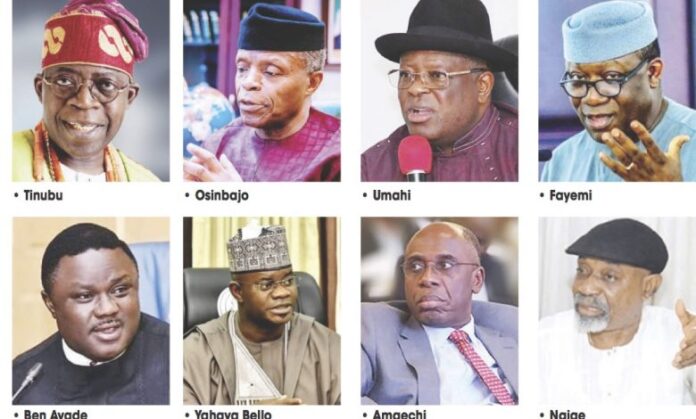 The All Progressives Congress, APC, has listed 9 conditions its presidential aspirants must adhere to in order to participate in the primaries.

The conditions were listed on page 17 of the nomination form given to the aspirants.

It was learned that the party also admonished to aspirants to take oaths against factionalisation, thuggery and anti-party activities.

Below are the conditions;

1. “Abide to preserve, protect and defend the Constitution of the APC and the Federal Republic of Nigeria.”

2. “Abide by the Primary election guidelines of APC and Nigerian Electoral Act.”

4. “I, my primary campaign organisation and my supporters undertake to accept the outcome of the primary and support whoever emerges as APC candidate for the general election.”

5. “Abide not to engage in dishonest practices, thuggery, being absent from meetings to which he/she is invited without reasonable cause; carrying out anti-party activities which tend to disrupt the peaceful, lawful and efficient organisation of the party or which are inconsistent with the aims and objectives of the party.”

6. “Abide not to give wrong information to any organ of the party or unauthorised publicity of a party dispute without exhausting all avenues or settlement or redress within the party.”

7. “Abide not to file any action in a court of law against the party or any of its officers on any matters relating to the discharge of the duties of the party without first exhausting all avenues for redress provided.”

8. “Abide to always follow the path of justice, honesty and unity amongst fellow contestants and party members. So help me God.”

9. “Abide not to factionalise or create a parallel congress, election, or party organ at any level.”

Over 20 aspirants have acquired the Party’s Presidential forms.

2023: I am the only contender to APC presidential ticket – Tinubu