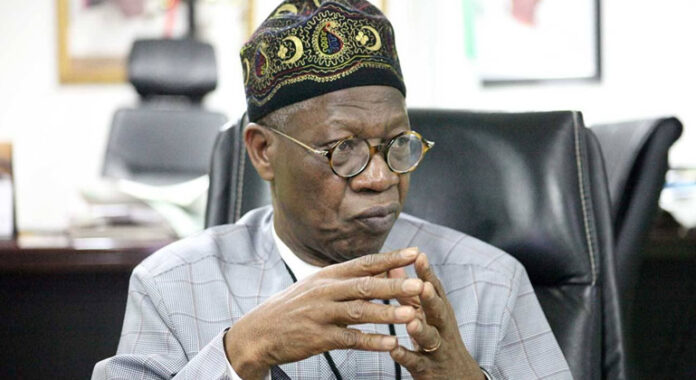 Kidnapping and banditry, according to the government of President Muhammadu Buhari, are not federal offenses in Nigeria.

Lai Mohammed, the Information Minister, made the remark to the media on Tuesday in response to the People’s Democratic Party’s statement on insecurity (PDP).

He said, “It’s surprising that a group that has dominated this country for 16 years does not understand that kidnapping and banditry are not federal offenses.” The minister instructed the party to demand that all governments, including those under its jurisdiction, prosecute kidnappers and bandits who have been apprehended.

Mohammed said the PDP did not respect its own words, as it played cheap politics while playing the ostrich.

He noted that the opposition made wild accusations against the President and his government. “For example, the PDP said the government has refused to engage, and that we were running a ‘government of exclusion’, and not engaging stakeholders.”

Mohammed insisted that the current administration has consistently engaged Nigerians on topical national issues, including security, the fight against corruption, terrorism, infrastructure and farmer-herder conflict.

He said the latest of such Town Hall Meetings was the one in Kaduna and further listed the recommendations. The minister said participants agreed: That the governance of human society should be based on Law rather than the whims and caprices of human beings and must be obeyed by all as all persons are equal before the law including the lawgivers;

That there is an urgent need for political restructuring and not separation; That the Judiciary be decentralized and reformed through Constitutional Amendment to remove the unitary control of the Superior Courts; That governments at all levels should ensure free, qualitative and compulsory Primary Education for all children of school age; That the Military, Police and other Security Agencies be expanded in number, retrained, provided with modern equipment and technology to cope with emerging security challenges.

”That both religious and traditional leaders encourage and promote inter-marriages for unity as contained in the 1999 Constitution as amended, Article 15, 3(c) which prescribes inter-marriage among persons from different places of origin, or of different religious, ethnic or linguistic association or ties; ”That the establishment of State Police be supported by the National and State Houses of Assembly to enable State Governments to have firm control in addressing security issues.

”That Traditional Rulers be given their age-long role of maintaining peace and security within their domain; ”That Local Government Autonomy be actualized to enable them have control of their areas including the ungoverned spaces in tackling security challenges;

How Fani-Kayode assaulted, drugged me — Wife