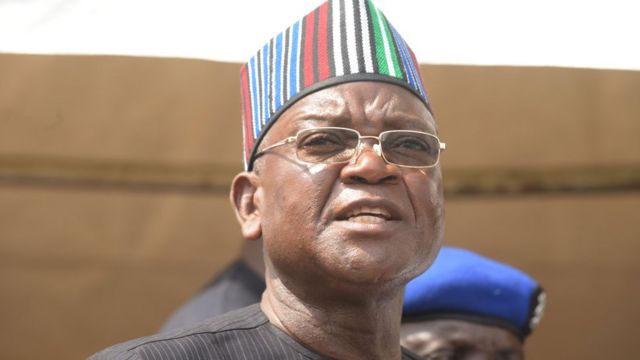 A ban is also placed on the use of Toyota Corolla old model.

The Sankera axis has three local government areas of Logo, Ukum and Katsina-Ala.

Governor Samuel Ortom disclosed this while briefing newsmen on the resolutions reached at the State Security Council meeting held on Thursday at the New Banquet Hall of the Government House in Makurdi.

The Governor explained further that the curfew would run between 6:00pm to 6:00am, adding that the state government has placed N5m bounty on whoever get useful information to the arrest of killers of Chief Suswam.

It would be recalled that Terkura Suswam and one of his aides were murdered Tuesday night at his residence in Anyiin, Logo local government area of the state by yet to be identified gunmen whom sources said had stormed the area in a Toyota Corolla vehicle popularly known as Duck Yansh.

“The State Security Council at his expanded meeting today resolved that the ban on motorcycles earlier restricted to two local government areas in Sankera axis (Katsina-Alla and Ukum) has been extended to Logo local government.

“The council also resolved to ban the use of Toyota Corolla old model known as (Duck yanch) in the three local government areas of Sankera axis.

“Those using it for commercial purpose must ensure its documentation and must go to motor park to load.

“So also has the council imposed curfew from 6:00pm to 6:00am on the three local government areas.

He revealed that the Security Council meeting also reviewed the security situation in the country and resolved to sensitize all stakeholders across the state on the need to be security alert on schools, particularly, boarding schools in their locality.

He said that government had set up committee, headed by his Security Adviser, Col. Paul Hemba (retd.) to monitor the sensitization and promised that government would take further steps if necessary.