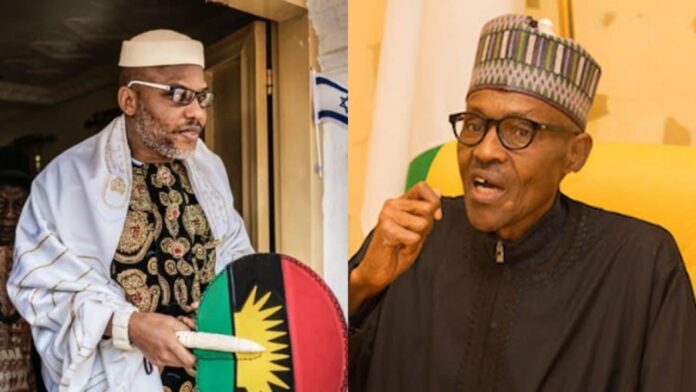 An Abuja Federal High Court on Friday ruled on the terrorism charges against Nnamdi Kanu, leader of the Indigenous People of Biafra, IPOB.

Justice Binta Nyako struck out eight of the 15 counts against Kanu.

The Nigerian government had filed the 15-count charges bordering on terrorism and treasonable felony against the IPOB leader.

The charges which bordered on terrorism were filed against Kanu by the Federal Government.

The IPOB leader has been in the custody of the Department of State Services, DSS, since his arrest in June 2021.

Kanu was arrested in Kenya and repatriated to Nigeria to continue his trial before Justice Nyako.

He was arrested and arraigned for agitating for the actualization of Biafra.

However, the IPOB leader contested the charges in a fundamental human rights suit against the Federal Government.

You’re next after Russia destroys Ukraine – Zelensky To US, NATO

2 men in court for allegedly stealing 90 litres of diesel

Falana to Sunday Igboho: You have no right to issue eviction notice to herdsmen