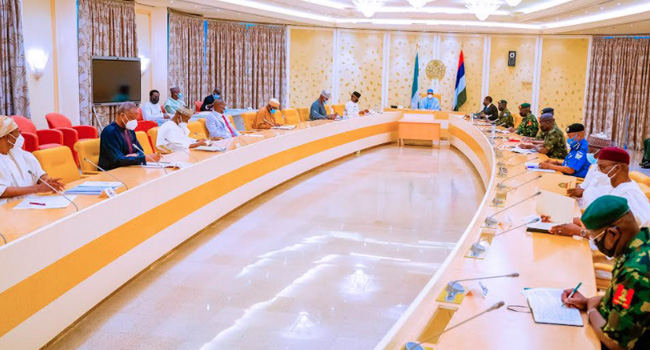 Less than a week, President Muhammadu Buhari is currently presiding over another Security Meeting at the statehouse in Abuja.

The meeting which is holding at the First Lady’s Conference Room was earlier held last Friday and adjourned till today.

The Agenda for the meeting is not unconnected with the heightened insecurity across the country.

Secretary to the Government of the Federation Boss Mustapha, Chief of Staff to the President Ibrahim Gambari, Vice President Yemi Osinbajo

Those in attendance include the Vice President, Prof. Yemi Osinbajo, Secretary to the Government of the Federation, Boss Mustapha, and Chief of Staff to the President, Professor Ibrahim Gambari.

At the last meeting, the National security adviser, Babagana Munguno disclosed in a statement issued on Friday that President Muhammadu Buhari was determined to stem the insecurity in the country.

According to the President, the insurgents, bandits, and criminals are still at it and there is no doubt that the Nigerian Security agencies with the cooperation of all, the nation will certainly overcome all the current security problems and defeat the forces of evil marauding about in different parts of the country.

“There shall be no relenting until peace and security is significantly restored in our communities,”

“Mr. President is very prepared to take profound measures in the wider interest of the people and the Nigerian nation.” Monguno, a retired Major-General said.

Monguno explained that the security meeting is necessitated by the fact that President Buhari is “concerned about the persisting security challenges in parts of the country.”

According to him, the Commander-in-Chief is ever ready to frontally confront the situation in the country.

2022 UTME: One killed as gunmen attack JAMB officials in Lagos

I will resign if it will end banditry, says Zamfara gov

CAN disatances self from Pastor offering N310,000 heaven ticket