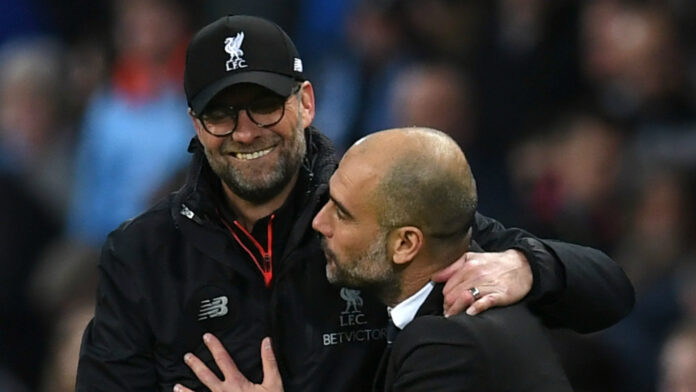 Man City boss, Pep Guardiola admitted he was delighted with the way his team twice came from behind against Liverpool at Anfield.

City dominated large parts of the game, but twice had to fight back from behind in a pulsating 2-2 draw.

The point means City are third in the Premier League going into the international break.

He said, “The Premier League is the best league in the world.

“Both teams wanted to win and wanted to try – it was pretty good.

“We compete and play with incredible personality, I’m very pleased with the way we played, the result we cannot change

“The way we played in Stamford Bridge, Paris and here, shows we are a great team.

“When my team play the way three games – we cannot forget which team we played. Liverpool one of the best three teams in the world – you played with courage and personality like we have done – we played here at a good level.

“Today, we didn’t lose but the draw is good, we just need to continue. I pray the players come back from international break safe.

“In the first half they didn’t have one chance. But in the second half we knew it with their momentum, but how we reacted was brilliant.

“The last two times we’ve been here we played with huge personality. I’m so pleased with that.

“The way we played the first half and last 15 minutes was devastating and really good.

“After they went 1-0 up, Anfield changes a lot. But we stayed in the game and we came back twice and I am incredibly satisfied.

“The way the team lose a game shows me we are a good team. And the way we lost in Paris and came back today.

“Overall we have started the season well. The game against Tottenham we were not together with half the squad on holiday and the worst game was against Southampton – the rest we were really good in all departments.

“Hopefully the players come back good from international break and move forward.”