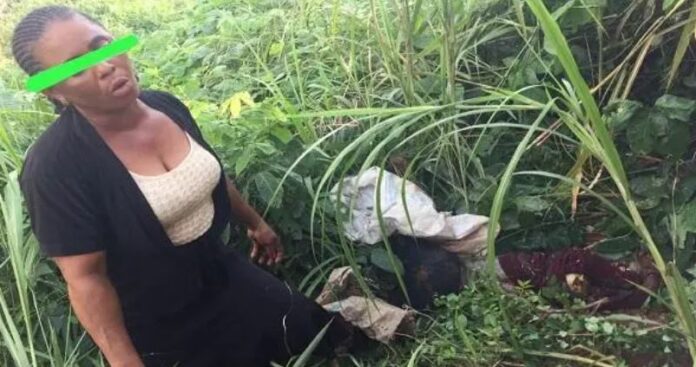 A 37-year-old woman, Udeogu Chinelo has been arrested by operatives of the National Agency for the Prohibition of Trafficking in Persons (NAPTIP), Anambra State Command for allegedly flogging her three-year-old grand daughter to death.

The suspect, from Enugwu-Ukwu but married in Nibo, Awka South Local Government Area was arrested in a primary School in Awka where she had earlier enrolled the deceased, Ifechukwu and had gone to collect back the school fees she paid for her.

It was gathered that the deceased had suffered convulsion after she was thoroughly flogged by the suspect who claimed to have rushed her to the hospital where she died.

He added that the suspect claimed the deceased was her granddaughter.

He said, “NAPTIP Anambra State Command arrested a 37yr old female suspect in Awka on the 5th October, 2022 for the offence of Child Abuse/inflicting grievous harm on a child, an offence prohibited in Human Trafficking Act.

“While being questioned on the whereabout of the victim, she disclosed that the victim had died. The suspect lead the operatives of NAPTIP to the scene where she disposed the body of the victim.

“On arriving the scene, the victim’s decomposing body was found wrapped in a black nylon bag where the suspect dumped her in the bush around Hezekiah Dike Crescent Awka.

“The suspect was immediately handed over to the Police by NAPTIP Anambra State Command to investigate the death of the victim.”

Reacting, Police spokesperson, Tochukwu Ikenga said the case has been transferred to state CID for a discretion investigations.

He said, “On the incident about a woman, Chinelo Udogu, who allegedly flogged a 3year old child to death and dumped her body in a bush at Amikwo, Awka, she has been arrested and the victim’s body recovered.

“The lesson for us to learn is that we should be cautious when angry and desist from going physical when correcting our children.”