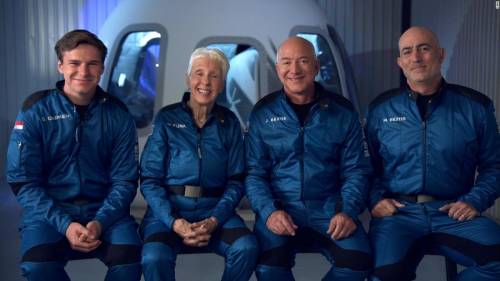 Billionaire Jeff Bezos blasted into space on Tuesday, in the first crewed flight of his rocket ship, New Shepard.

The world’s richest man was accompanied by Mark Bezos, his brother, Wally Funk, an 82-year-old pioneer of the space race, and an 18-year-old student, BBC reports.

They travelled in a capsule with the biggest windows flown in space, offering stunning views of the Earth.

All four passengers have now parachuted safely back to Earth after their 10-minute, 10-second trip.

New Shepard, built by Bezos’ company Blue Origin, is designed to serve the burgeoning market for space tourism among the super-wealthy.

On this flight was the oldest person who has been to space – Ms Funk – and the youngest, student Oliver Daemen.

He later said: “My expectations were high and they were dramatically exceeded.”

Two minutes into the flight, the capsule separated from its rocket and continued upwards towards the Karman Line – the most widely recognised boundary of space, 100km up. The newly minted-astronauts shouted “wow!” and cheered.

Jeff Bezos said he was surprised by the sensation of microgravity: “It felt so normal,” he explained.

Ms Funk added: “It was great, I loved it, I can hardly wait to go again.”

In the 1960s, Ms Funk was one member of a group of women called the Mercury 13. They underwent the same screening tests as male astronauts, but never got to fly into space.

Mr Bezos told CBS News on Monday: “Wally can outrun all of us. During the Mercury 13, she was better than all the men and I can guarantee that’s still true today.”

Bezos said he was struck by the views of our “fragile” world, adding how important it was that the earth was protected from ongoing damage. He also said the rocket used “environmentally benign” propellants.