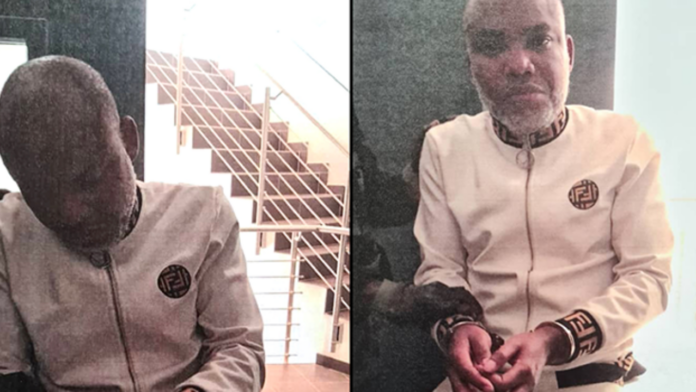 Ifeanyi Ejiofor, the lead counsel to the detained leader of the Indigenous People of Biafra,IPOB, Nnamdi Kanu, has raised alarm that the Department of State Service has not given the legal team access to Kanu.

Kanu was remanded in the facility of the DSS after his arraignment on Tuesday.

Ejiofor said members of the legal team had formally applied to the DSS to allow them access to their client.

He said the DSS had yet to respond to the legal team’s application seeking access to the IPOB leader.

Ejiofor stated this on Wednesday.

He said, “We have tried getting access to the office today to see him while he is being detained.

“In line with their procedure, we have written to the DSS to allow us access to see him, more so, in view of the subsisting charge.

“They have not responded to the application. We were requested to come formally; we have done that and we copied the court.

“We are awaiting their response to the application.”

Ejiofor also alleged that Kanu was abducted, contrary to the popular view that he was arrested.

He added, “Let me correct an impression. Nnamdi Kanu was not arrested. He was abducted by the Nigerian security agency in collaboration with African allies.

“If we are talking about arrest, it will sound civil. But in this case, he was abducted.

“I will confirm from him the exact location where he was abducted from.

“He was abducted and smuggled into Nigeria against all professional ethics and in complete violation of all diplomatic conventions.

“When we get to the bridge, we will cross it as it is a matter for the court to look into.”

2023: Tinubu reacts as Buhari reveals candidates he will support