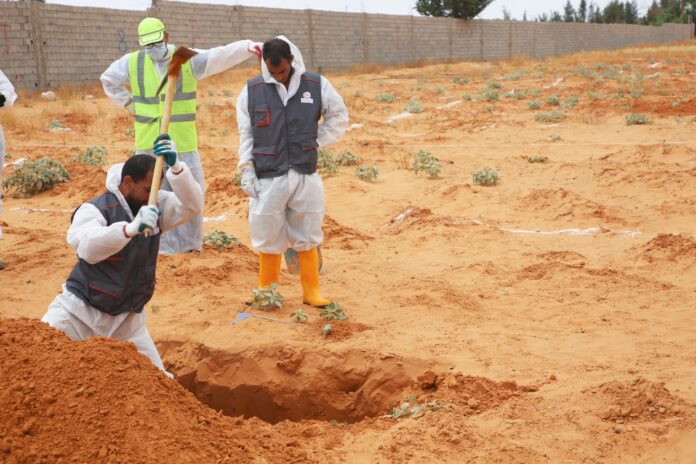 A new mass grave has been discovered in Mashrou al-Rabt, in the city of Tarhouna, western Tripoli, the General Authority for Search and Identification of Missing Persons of the Government of National Accord (GNA) announced on Saturday.

This discovery illustrates the extent of mass graves in this region which was occupied until the end of May by supporters of Marshal Khalifa Haftar, leader of the Libya National Army (LNA).

In a statement issued on Saturday on its website, the Authority said that its teams have discovered a new mass grave, stating that the exhumation of the remains is still underway.

READ: “PDP Has No Future In Nigeria”

At the end of last December, the Authority recovered four unidentified bodies from two separate mass graves in the same area and handed over several other bodies to their families after identification.

A delegation from the International Criminal Court (ICC) visited Tarhouna in early December to inspect the mass graves in the city, the second visit after a previous one in July. It called for an indictment of those involved in the mass graves and the planting of anti-personnel mines in the area.

In addition, Human Rights Watch (HRW) on Thursday called on the GNA to investigate the fate of hundreds of missing residents of Tarhouna, where several mass graves have been discovered since the summer.

The New York-based human rights organization reported on its website that 120 bodies have been exhumed from 27 mass graves so far.

HRW quoted the government’s General Authority as saying that “at least 338 of Tarhouna’s residents lost their lives after the local Al-kani militia, known as Kaniyat, took control of the city in 2015.

According to Human Rights Watch, Tarhouna residents reported that Haftar’s allied LNA “abducted, detained, tortured, and killed, and often disappeared those who opposed it or were suspected of opposing it”

CAN disatances self from Pastor offering N310,000 heaven ticket

I am from Edo — Deontay Wilder