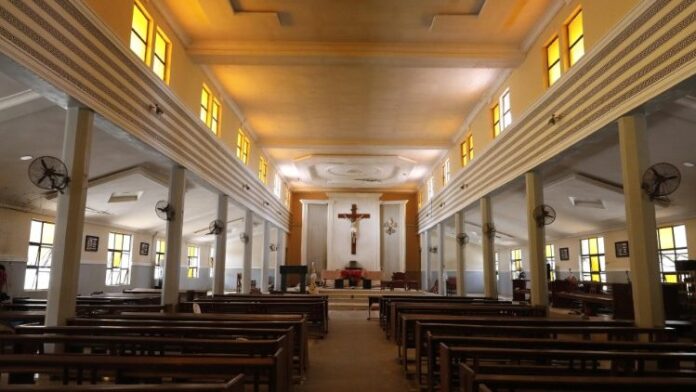 Online news platform, Foundation for Investigative Journalism, has revealed how fake prophesies were allegedly given by clerics of the Eternal Sacred Order of Cherubim and Seraphim on Pearse Street, Yaba, Lagos.

Disguising as someone in need of ‘divine help’, the FIJ journalist had approached the branch of the church in February 2022 and sought help.

Describing his arrival at the church, he said, “It is unclear why the gatekeepers at ‘national headquarters’ of the Eternal Sacred Order of Cherubim and Seraphim on Pearse Street, Yaba, Lagos, are so unwelcoming when we arrive in the morning of the second day after the famous Valentine’s Day, but one of them parks us grudgingly, anyway. Madu Chiboka, the prophet we had been conversing with, tells us on the phone that a “senior prophet” would attend to us in a matter of minutes. The wait for him inside the church gifts me a few minutes to run my eyes through the auditorium.

“It is not the biggest church you’ll ever see. But I count deep brown pews studiously arranged in 13 rows and four columns, meaning, technically, that the ground floor can sit at least 312 congregants per time if six occupy a pew. There are three more pews at the rear but they are not arranged to fit into the rows; my hunch is that they’re reserved for in-service protocol officials.”

The FIJ report released in October revealed how the prophets (altogether) gave about 15 alleged fake prophesies.

FAKE PROPHECY 1: ‘YOU ARE NOT MOVING FORWARD’

He makes the motion of someone who takes a few steps forwards and several more backwards.

“You are not moving forward,” he tells me. “Instead, you are marking time. Even if you’re given N1 million, you’ll squander it,” the Senior Prophet at the church, whose name was not given had said.

FAKE PROPHECY 2: ‘YOU BREAK UP, THEN RETURN TO YOUR EXES’

“You thought you were enjoying; now the ants are biting you. Thank God you have not yet entered into your afternoon (figurative for middle-age) — you are still within your morning (figurative for youth) — and you’re about to enter your afternoon, otherwise the ants would have bitten you beyond recognition,” the prophet was quoted to have said.

He said the Senior Prophet explained that these forces “wanted to use me to shame my family.”

“For example, this girl will come, slight quarrel, you leave her. You date another one and leave her. But when the first comes back, you go to her, returning to your vomit,” he says. “It’s a force that was cast to disgrace your family, and you’re allowing it. You say it’s ‘guy’ (slang for youthful exuberance); it’s not guy; you’re deteriorating yourself,” he quoted the prophet to have said.

Reacting in his story, he said the prophecy was false. “This prophecy is wrong on several fronts. I do not have an active dating life in recent memory. In the last six years, I have only had one-and-a-half relationships — with people I have completely lost touch with, meaning the chance of getting back was never on the cards. And in the preceding years, there was no ex I ever got back with! The prophecy in particular was a pure invention,” the FIJ journalist said.

He listed other prophecies, said to be fake, as proclaimed by the clerics, as: ‘YOU ARE BEING MOCKED’, ‘SEX IN YOUR DREAMS’, ‘PRISON AROUND JUNE, JULY’, ‘YOU’RE IN CHAINS’, ‘YOU ARE A CULTIST’, ‘YOU MADE A PROMISE’, ‘AN INVITATION TO HERBALISTS’, ‘IF YOU TRAVEL, AN ACCIDENT WILL HAPPEN’, and ‘YOUR MOTHER IS NOT HAPPY WITH YOU.’

The journalist noted that the prophecies were false, as he even did some of the things he was warned against and there was no repercussion. Reacting to the prophecy about him travelling and getting involved in an accident, the journalist said, “Another fake prophecy. Actually, I did not listen to Prophet Johnson. I did embark on that trip and returned to base without even a scratch on my car, much less an accident.”

He also said he never saw any trace of being jailed as said by the prophet.

“This prophecy was made in February. It is now October and at no time was there ever a prison scare this year. Not in June, not in July,” the FIJ founded by Fisayo Soyombo reported.

Why Nigerian youths must influence outcome of 2023 elections- European Union