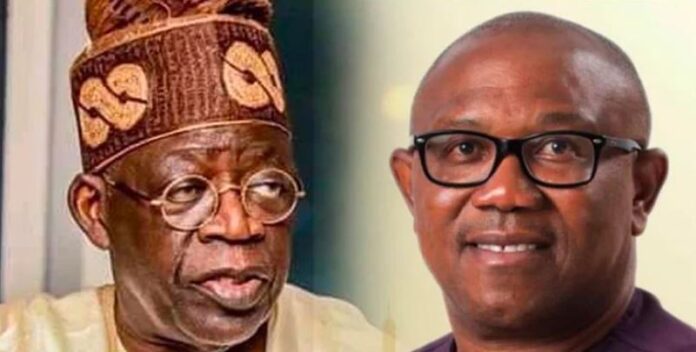 This was disclosed in a statement issued by Director, Media & Publicity, APC Presidential Campaign Council, Bayo Onanuga, who noted that “after perusing the document which is very high on graphics and demagogic rhetorics and short on substance, we have come to the conclusion that the document is empty and vacuous”.

The statement added that the document which is titled ‘It is Possible: Our Pact with Nigerians’, offers nothing refreshing to Nigerians and comes across as total anti-climax, claiming that the subtitle ‘Action Plan’ was parroted from Tinubu’s manifesto.

“Mr. Peter Obi’s document contains no grand policy initiatives and options to excite right thinking Nigerians. It was silent about how Obi wants to achieve his high falutin objectives. Instead, it will set alarm bells ringing in the South South and North East as Obi promises to ‘engineer the transition of Nigeria from a fossil fuel dependency to climate and eco-friendly energy use”. As expected, Obi’s document contains fallacies and false statistics

While refuting the claim that Nigeria is a failed state, the council said Obi’s policy document is a poor imitation and regurgitation of what the current APC-led administration of President Muhammadu Buhari is doing.  It added that most of the things Obi planned to do were already being achieved by the Buhari-led government.

While faulting Obi’s strategy of tackling insecurity by partnering with Cameroon, Chad and Niger, it claimed that Anambra was one of the most unsecured and volatile states riddled with criminals and kidnappers when Obi was Governor for 8 years.

“It is a pity that Mr. Obi and his party didn’t know that President Muhammadu Buhari did this within his first week in office as President in 2015 and has continued to strengthen regional cooperation. The Multinational Joint Military Task Force with headquarters in Ndjamena, Republic of Chad is an outcome of the successful diplomatic shuttle to these neighbouring countries, including Benin Republic. Through the Joint Military Task Force and our gallant soldiers, Boko Haram and ISWAP have been routed out of Nigeria and permanently degraded and the whole of North East is stable.  Thousands of displaced people have returned to their communities to restart their social and economic activities,” it said.

The campaign council of the ruling party also claimed that Obi promised to complete Dadinkowa hydropower project as part of his promise to solve electricity problems in Nigeria without knowing that same project has since been completed by the current administration of President Buhari.

“On Infrastructure: Peter Obi promised to invest in infrastructure especially rail, ports, broadband, roads, airports etc. We find this laughable and a barefaced dishonesty just to hoodwink Nigerians. This is the same Mr. Obi who has launched the most vicious attacks on President Buhari for having the courage to upgrade our broken critical infrastructure. For the past 7 years, Mr. Obi’s sing-song has been that infrastructure does not help the economy and eliminate poverty. While President Buhari and the APC administration believe there can never be any meaningful economic growth without infrastructure to power it, we don’t expect Mr. Obi, a warehouse and container economist to understand the nexus between economic growth and infrastructure. It is good that Obi has now seen the light on the social and economic imperatives of infrastructure but he can’t be trusted to do anything. There is no signature infrastructural project Mr. Obi can point to in Anambra State where he governed for 8 years,” it added.

The statement also said Obi cannot be trusted to grow the non-oil revenue of the country, claiming that Obi couldn’t increase the Internally Generated Revenue of Anambra state by ordinary 5% year on year when he was governor.

“If Obi could not change the fortunes of the state he led for 8years,  he has no capacity to deliver on non-oil revenue for Nigeria. Only our candidate, Asiwaju Bola Ahmed Tinubu has the record to grow revenue and significantly improve non-oil GDP because he set the standards in Lagos which the Federal government copied. Today, Lagos State is the 5th largest economy in Africa with over $150b GDP. The current APC-led Federal government has expanded the tax net in Nigeria from 10million payers in 2016 to current 41million according to the Federal Inland Revenue Service. The Buhari administration alone brought 31million new taxpayers into the net from 2016 to 2021, more than what all previous governments since independence have ever achieved”.

It said that contrary to the image of a reformer and thinker Obi and his followers have created of him, the Labour Party candidate is a mere impostor who only seeks to play on the emotions of his followers.

“Mr. Obi’s policy document, if anything, has only exposed him as ill-prepared for the titanic task of governing a country the size of Nigeria. As a candidate, he has nothing new to offer Nigerians beyond hawking fake statistics and preying on the young people’s sentiments as a demagogue.

“Nigerians are warned to steer clear of Obi and his party. His whole presidential ambition is full of sound and fury, signifying nothing, to paraphrase Williams Shakespeare in his play Macbeth,” it said.

BREAKING: Nnamani is working for us, says APC

2023: Buhari Speaks On His Successor