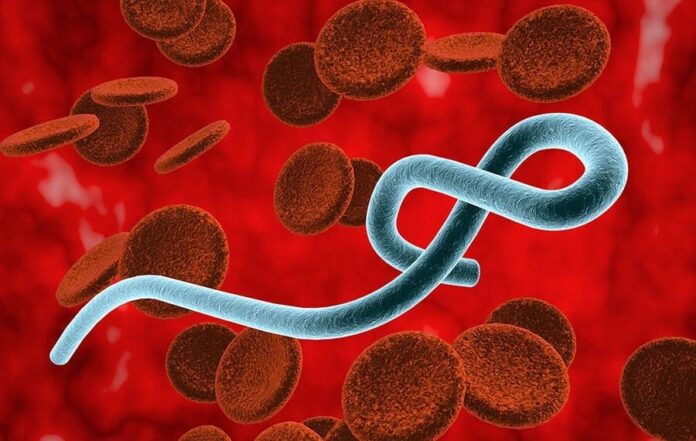 The ongoing Sudan strain Ebola outbreak in Uganda was confirmed by health authorities on September 20, 2022, after a case was confirmed in a village of Madudu sub-county in Mubende district, central Uganda.

The case was a 24-year-old male who developed a wide range of symptoms on September 11, including high-grade fever, tonic convulsions, blood-stained vomit and diarrhoea, loss of appetite, pain while swallowing, chest pain, dry cough and bleeding in the eyes.

The 24-year-old was reported to have visited two private clinics without improvement. He was then referred to the Regional Referral Hospital on September 15, where he was isolated as a suspected case of viral haemorrhagic fever.

A blood sample was collected on September 17 and sent to the Uganda Virus Research Institute in Kampala where RT- PCR tests conducted were positive for SUDV on September 19. Unfortunately, he died on the same day.

Ebola virus disease is a severe disease of humans and other primates caused by an the RNA virus of the family Filoviridae and genus Ebola virus.

How serious is the Sudan strain of Ebola?

The fact that this is the Sudan strain of Ebola, for which there is no approved vaccine, unlike the more common Zaire strain, is a serious concern.

“Sudan virus was first reported in southern Sudan in June 1976, since then the virus has emerged periodically and up to now, seven outbreaks caused by SUDV have been reported, four in Uganda and three in Sudan. The estimated case fatality ratios of SVD have varied from 41 per cent to 100 per cent in past outbreaks.

“The virus is introduced into the human population through close contact with the blood, secretions, organs or other bodily fluids of infected animals such as fruit bats, chimpanzees, gorillas, monkeys, forest antelope or porcupines found ill or dead or in the rainforest. The virus then spreads through human-to-human transmission via direct contact (through broken skin or mucous membranes) with either blood or body fluids of a person who is sick with or has died from SVD or objects that have been contaminated with body fluids (like blood, faeces, vomit) from a person sick with SVD or the body of a person who died from SVD.

“The incubation period ranges from 2 to 21 days. People infected with Sudan virus cannot spread the disease until they develop symptoms, and they remain infectious as long as their blood contains the virus. Symptoms of SVD can be sudden and include fever, fatigue, muscle pain, headache, and sore throat later followed by vomiting, diarrhoea, rash, symptoms of impaired kidney and liver function. In some cases, the patient might present both internal and external bleeding (for example, bleeding from the gums, or blood in the stools).

“The diagnosis of SVD can be difficult, as early nonspecific manifestation of the disease may mimic other infectious diseases such as malaria, typhoid fever and meningitis. Confirmation is made using numerous diagnostic methods including RT-PCR. Supportive care – rehydration with oral or intravenous fluids – and treatment of specific symptoms improve survival,” WHO said.

The Nigeria Centre for Disease Control said just like other types of Ebola virus, people infected cannot spread the disease until the development of symptoms.

“Symptoms include fever, fatigue, muscle pain, headache, and sore throat later followed by vomiting, diarrhoea, rash, symptoms of impaired kidney and liver function. Symptoms may appear anywhere from 2 to 21 days after exposure to the virus, but the average is 8 to 10 days,” the NCDC said.

As of October 2, Uganda has recorded 43 cases of Ebola.

The case fatality count has also risen to nine, according to the Ministry of Health, Uganda.

The Ebola outbreaks updates posted on its Twitter page @MinofHealthUG showed 882 contacts listed for follow up and there are 24 active cases on admission.

Currently, there are no vaccines or therapeutics for the prevention and treatment of this strain of the virus.

The NCDC said recovery from EVD depends on good supportive clinical care, management of co-morbidities, and the patient’s immune response. People who recover from Ebola virus infection develop antibodies that last for at least 10 years.

To prevent infections, experts advice avoiding non-essential travel to locations where the outbreak is reported for the moment and direct contact with blood, saliva, vomit, urine, and other bodily fluids of people with suspected or confirmed EVD.

In suspected and/or confirmed EVD cases, direct physical contact should be avoided by ensuring strict isolation, the use of protective gowns, masks, gloves and safe disposal of needles, beddings, and other contaminated materials

According to the national public health institute, “safe burial practices are recommended for all cases of death from unknown causes, suspected to be EVD or other viral haemorrhagic diseases.

“The strict practice of standard infection prevention control practices in the healthcare setting for all suspected patients must be always adhered to.”