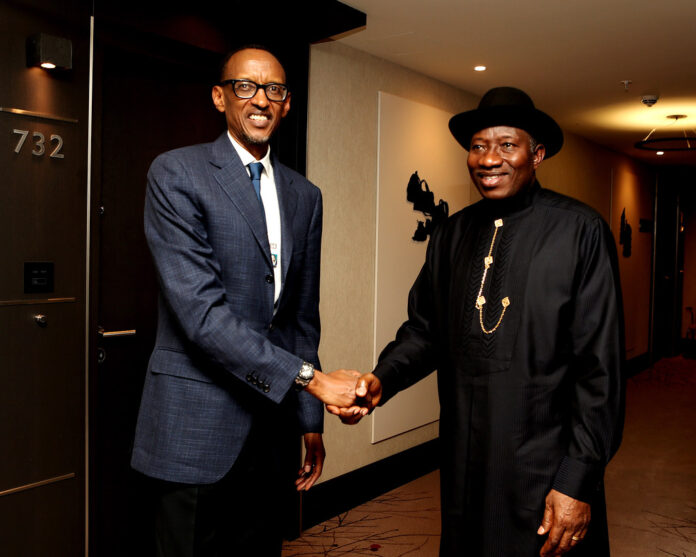 Former Tanzanian President, late John Magufuli, Rwandan President, Paul Kagame, former Nigerian President, Goodluck Jonathan, and a host of many others would be honoured at the maiden edition of the African Heritage Concert and Awards.

Distinguished African personalities would be honoured at the event slated for April 1, 2023, in Kigali, the capital of the Republic of Rwanda.

According to the organizers, the event is intended to celebrate and honour personalities of African heritage who have distinguished themselves through remarkable achievements across the globe.

The organizers noted that the recognition has become imperative to foster the African culture of excellence and promote Afrocentrism.

The African Heritage Awards and Concert will be a celebration and global recognition of outstanding achievements made by Africans, including those residing in diaspora, who have excelled in Business, Politics, Philanthropy, Entertainment/Arts and Culture, Science and Technology, and Social Innovation.

Aside from bestowing international prestige and recognition, the award will focus on the critical importance of culture and leadership, which the organizers believe lies at the core of any shared advancement of socioeconomic and political development in Africa.

The Award will also cast a spotlight on individuals who, under challenging circumstances, have empowered their people and impacted their sphere of influence to pave the way for sustainable and equitable development.

“Bearing in mind that Africa is root to a plethora of people all over the world who continue to thrive and evolve despite the many issues and challenges stemming from stereotypes, the organizers strongly affirm that the event will contribute immensely to changing the global perception of Africans, and also spur the needed critical mass for the attainment of cultural evolution and revolution in sustainable development.

“The highpoint of the event will include creative performances from some African best and presentation of awards to diligently selected individuals who have made remarkable impact to humanity. It will feature presentations by notable persons and leaders, Award conferment, performances by musicians, comedians and poets, and a Party to cap it off,” the organisers noted in a statement issued on Monday.

It added that the choice of the cosmopolitan city of Kigali to play host to the maiden edition of the African Heritage Concert and Awards, was premised on the many successes of Rwanda as a Country that has now elevated her, in many respects, as the pride and face of Africa.

“At the core of the Afri-Heritage event is the agenda to counter stereotypes by creating a new African narrative; galvanizing and showcasing the true African heritage and recognizing outstanding achievements by Africans. The event is also expected to Promote cultural exchanges and peer review activities; Build multi-stakeholder engagement in community participation; Harness cultural, political and developmental ideas; Foster partnerships and international support for development; Showcase Africa’s prospects and potentials.

“Participation at the event would be open to persons willing to attend. Attendance will be based on registration and invitation. While attendance is free for award recipients and their spouse’s, the cost effect for Regular Ticket would be $100, VIP Ticket-$1000, and VVIP Ticket-$2000.

The Afri-Heritage event is organized by Heritage Times [HT], an integrated media communications company. Heritage Times [HT] is strategically positioned to be at the forefront of media innovation in Africa, delivering compelling digital news content and other strategic services in an evolving media market including events management and strategic advertising