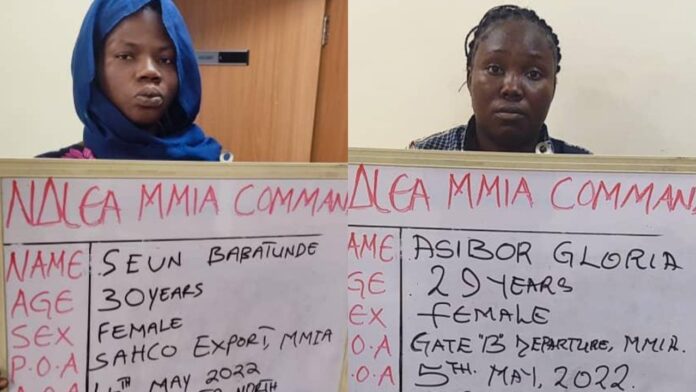 Shola Ogunrinde, a freight agent who carried the shipment for export to Dubai, UAE, was arrested.

A subsequent operation resulted in the arrest of a pregnant lady, Mrs. Seun Babatunde, who runs an alcohol joint in Iyana Ipaja’s Pleasure neighborhood.

Babatunde claimed the drugs were being sent to her husband who lives in Dubai.

The second pregnant woman, Mrs. Gloria Asibor was arrested last Thursday while attempting to board a Turkish Airline flight to Bolonia, Spain via Istanbul, Turkey.

A search of her luggage containing food items led to the discovery of 300 tablets of 200mg and 225mg high dosage Tramadol concealed in crayfish.

Also, a Brazilian returnee, Nworie Phillip Chikwendu was nabbed last Tuesday during an inward clearance of passengers on a Qatar Airways flight from Sao Paulo enroute Doha to Lagos.

Two parcels of cocaine were discovered concealed in a pair of brown slippers hidden in his backpack.

A further search of the pair of black slippers he wore led to the recovery of additional two parcels of cocaine built into the soles.

Nworie who claimed to be a barber in Sao Paulo, said he came to Nigeria for the burial of his father.

The suspect claimed he got into the criminal act because his trip was sponsored by a Brazil-based friend who gave him the drug to deliver in Lagos for N2million.

Meanwhile, large consignments of psychoactive substances have been intercepted in parts of Northwest, Northeast and Northcentral.

In Kaduna, a drug dealer, Obinna Anene a.k.a Young Alhaji was arrested on on Friday at Buwaya in Kaduna.

The same day, a trafficker, Alhaji Modu Yahaya was caught with 26.5kg cannabis in Damaturu, Yobe, while travelling in a commercial vehicle from Abuja to Maiduguri, Borno.

In Lagos, during raids in black spots in Mushin Olosha, Akala, Langbasa and Ikota, different quantities of Cocaine, Heroin, Methamphetamine, Cannabis, and Skuchies were found.